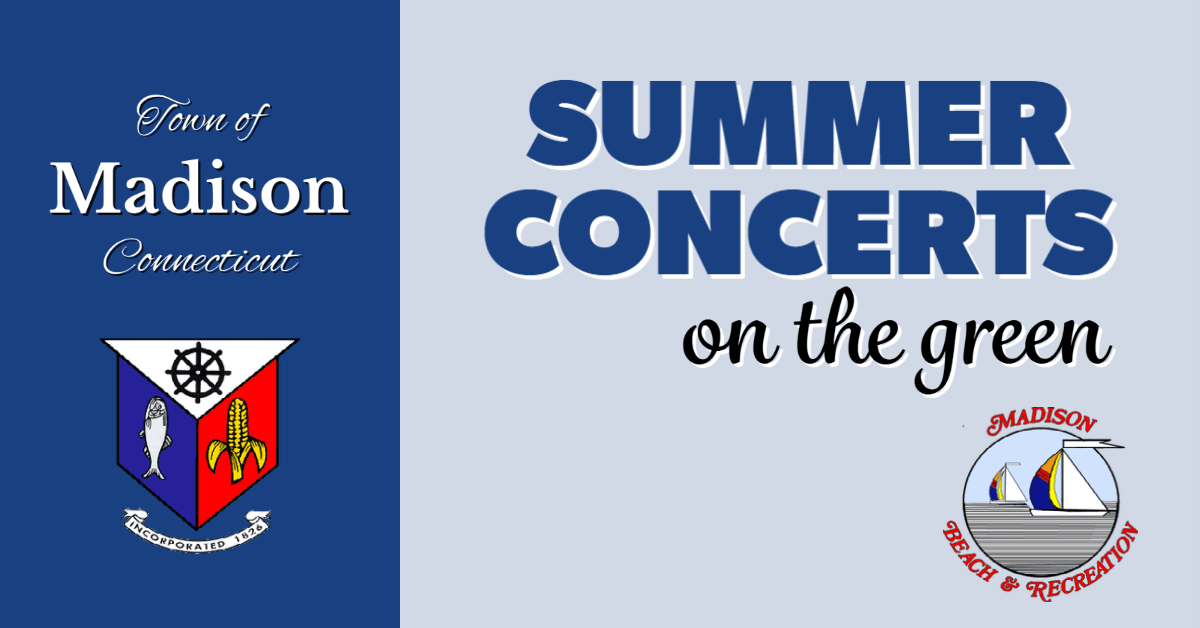 July 10 – Coyote River Band:  We will have you dancing to covers by Johnny Cash, The Eagles, Donna Summer, Steely Dan, and The Bee Gees and singing along to Kenny Chesney, Miranda Lambert, Thomas Rhett, Marin Morris, Dolly Parton, Shania Twain, Keith Urban, Reba McEntire, Pat Benatar, Heart, Rod Stewart, John Mellancamp, Linda Ronstadt & Garth Brooks and plenty more.  We are also proud to have an album full of originals we are able to share.  With male and female vocal leads, Dave and Renee (yes they are a couple!), the band and its trio bring a rare chemistry and energy to the stage that sets us apart from all other bands. All of our members are well-seasoned professional musicians having performed at venues such as the Infinity Halls (Norfolk & Hartford), Sullivan Hall in NYC, Wolf Den and BBQFest at Mohegan Sun, The Atrium and Hard Rock Cafe, at Foxwoods, headlined at Septemberfest at the Simsbury Performing Arts Center, weddings, private parties, bars and restaurants and several fairs across New England. We competed in and won the 2013 Hebron Harvest Festival Country Music Challenge as Best Country Band in New England and performed there in September 2014 as the headlining band.

July 17 – Among the Acres:  Merging elements of Folk, Rock, Pop, and Americana, Among the Acres delivers an eclectic yet singular sound, marked by a tapestry of four-part vocals, dynamic grooves and a keen sense for lyricism. Cutting their teeth playing everywhere from breweries and small clubs to festivals and showcases throughout the Northeast, the “Acres” have been honing their powerhouse of a live set non-stop since the band’s inception in 2017. Soon after forming they garnered local acclaim winning CTNow's "2018's Best New Band" and "2019's Best Americana Band".  2018's “Looking In”, recorded at Telefunken Elektroakustik Soundstage, marked the first recorded release for the band and received critical acclaim from various indie blogs, music curators, and listeners alike.  For the band's sophomore album, "Dreamcatcher", they headed to Ghost Hit Recording Studio. After a successful Kickstarter campaign, the album was released in 2020 and went on to win The Hartford Courant's "2020 Connecticut Albums of The Year". Both albums and a recent collection of covers recorded during the pandemic can be found on all streaming platforms.

July 31 – Nightshift Band:  Nightshift is a 5-piece 60’s, 70’s and 80’s cover band that only performs the most popular and the most fun songs from those three decades. Everyone loves every song that they play and they always have a REALLY fun time, from the kiddies to the grandparents! Nightshift takes you back to your happy place!  Check them out at http://www.nightshiftbandct.com/

August 7 – 1 Wild Night:  1 WILD NIGHT Bon Jovi Tribute Band has been wowing Bon Jovi fans in the Tri-State area since 2013. The band features look-alike lead singer Alex Barbieri as "Jon Bon Jovi," with the band backing him up which includes Marc Amendola on Guitar, MJ Vaicunais on Keys, Rob Servedio on the Drums and Ken Schwartz on Bass. All five have decades of experience performing live at festivals, clubs and theaters. At a 1 WILD NIGHT show, you’ll hear all the classics spanning Bon Jovi’s remarkable 30-year career, from their break out single, “Runaway” to megahits “You Give Love a Bad Name,” “Livin’ on a Prayer” and “Wanted Dead or Alive,” plus more classic hits by Def Leppard, Journey, Whitesnake, and more! 1 Wild Night has played a steady calendar of live shows while together and the band keeps entertaining crowds who seem to be having an amazingly good time!! You can check out the band and their shows on their Facebook & Instagram Pages.

August 14 – The Larry Stevens Band:  The Larry Stevens Band is an accomplished group of creative, professional performers who put their special musical twist on everything they do. Guided by their powerhouse front man Larry Stevens, the band leads audiences on a musical journey through decades of great rock ‘n’ roll.  Stevens and the band have shared the stage with major national acts including Kenny Loggins, Huey Lewis and The News, Gin Blossoms, The Marshall Tucker Band, America, Foreigner, The Doobie Brothers, Peter Frampton, and many others.  While living in Nashville, Stevens wrote and recorded with many of the top names in the industry. He has found himself on stage at highly sought-after venues including the legendary Bluebird Café in Nashville; The Bitter End, Kenny's Castaways, and The Iridium in New York City; PNC Bank Arts Center, New Jersey Performing Arts Center, The Meadowlands/Giants Stadium, Bergen Performing Arts Center, The New Jersey Balloon Festival, and Surflight Theatre in New Jersey; Ridgefield Playhouse in Connecticut; The Palace Theatre in Stamford Connecticut; and many other important stages. In the studio, Stevens has been privileged to include numerous world-renowned musicians on many of his recordings.  His live shows include original songs along with popular hits ranging from The Beatles, Van Morrison, and Eric Clapton to current music from Jason Mraz, John Mayer, and Jack Johnson, all infused with his trademark sound. Stevens and the band attract audiences of all ages with their upbeat sound and outstanding musical skills. Larry has been working on his new project and is hoping for a spring/summer release! For more information please visit their website at www.larrystevensband.com.

August 21 – Last Licks:  LAST LICKS is CONNECTICUT’S BAND OF THE YEAR 2019. Given that distinction from Governor, Ned Lamont. LAST LICKS is a top shelf classic rock band based in central Connecticut. The band differentiates themselves from all other bands in the genre by pulling out the songs that are uncommonly played, yet very well known and loved. The band is talented, charismatic, and delivers a show that always leaves the audience wanting more. We've performed at the Mohegan Sun Wolf Den many times to packed capacity crowds, we've also had sold out shows at New Britain's Trinity on Main Theater and have packed various rock clubs throughout CT. Last Licks has played many town summer concert series, as well as festivals, and fairs such as New Britain - Main Street USA Festival, Branford - Branford Festival, North Branford - POCO Festival, Lyman Orchards - St Jude Music Festival, Meriden - Daffodil Festival, Enfield - Taste of Enfield, 4th of July Celebration, Berlin - Berlin Fair, Newington - Life Be in it Newington Extravaganza and the Mohegan Sun Roof Top Summer Concert Series.

August 28 – Eddie Seville:  Eddie Seville is an American songwriter and multi- instrumentalist from New England best known as the voice & creative force behind the alt- country / roots rock band Steel Rodeo.  As a solo artist, a member of Frank Carillo's Bandoleros and a frequent special guest,  he's performed throughout the continental US, Canada, Europe and the Virgin Islands.  Eddie's written songs published by Sony / ATV,  songs released on Island / Atlantic and Universal Records as well as music aired on each of the top three US television networks, ESPN and HBO Europe . . . his songs are covered by local musicians, regional bands and international artists,  most notably George Kooymans of the Dutch band Golden Earring, who covered "Blind Love" in 2010 and also "Ticket To Heaven" for a 2020 release.  2019 saw the release of an EP called "Cobblestone" by Brickyard Saints, a band that features Eddie Seville, Frank Carillo, Danny Miranda and Simon Kirke ... while all four contribute vocals and songwriting, the opening track "Love's Got A Hold" was penned by Eddie Seville.  His single, "One More Guitar" was the centerpiece of an ad campaign by the Netherlands based Homestead Guitar Company and his work spans projects with veteran producer Paul Orofino,  Augie Meyers (Texas Tornados / Bob Dylan), Matt Cartsonis (Warren Zevon) and Simon Kirke (Free / Bad Company), in addition to numerous credits on a wide range of recordings that include film, television, independent and major label releases.

Check out some more concerts at Salt Meadow Park